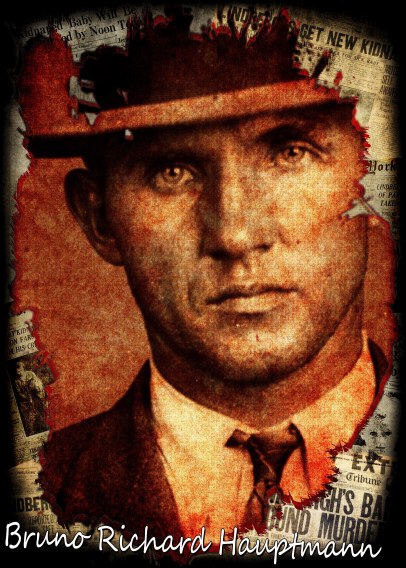 Isn’t this an extraordinary image? A spine-chilling representation of Richard Hauptmann.

My new book is called Please Forgive Us, Richard Hauptmann and the title story is a re-imagining of the famous criminal case of the 1930’s – the Lindbergh baby kidnapping. It is a speculative take on the case – a bot from the future re-analyses the data and comes to an interesting conclusion. In my mind, the story is a plea for mercy and compassion but I don’t know how successful I am.

The crucial thing about the Lindbergh baby kidnapping was that Richard Hauptmann was arrested, charged and found guilty. He was a German immigrant, full name Bruno Richard Hauptmann. But his friends, family, wife and even his own mother all called him Richard. But the press insisted on calling him Bruno, to give him an un-American name, to demonise the man, to make decent Americans distrust him. Who knows what would have happened if his name had been widely reported as Richard…

As it is, the US legal system of the 1930’s found him guilty without question. His incompetent lawyer allegedly told the press he believed Hauptmann was guilty during the trial. Well, there were no other suspects…actually there were, but it’s too complicated to explain. I’m guessing Hauptmann, whose English language skills were limited,  didn’t fully understand the legal process, his rights, his avenues of appeal. Certainly he wouldn’t have had an interpreter to assist. The legal system today at least acknowledges that people who cannot speak the language of the court deserve to know what’s going on. But much is lacking today, in similar ways to Hauptmann, for people whose first language is not the language of the dominant culture.

I wanted to share this image of Richard Hauptmann. It’s by a brilliant artist who starting designing the kind of t-shirt he wanted to wear when he couldn’t find any t-shirts of the kind he wanted to wear. He has a really impressive range of  t-shirt designs: literary figures, pop culture, TV, schlock horror, Sherlock Holmes, you name it.

And in amongst them all  is the utterly compelling image of Richard Hauptmann. Such sadness and incomprehension in his eyes:

So thank you, Mr t-shirt man. You are a genius. I’m sure Richard Hauptmann and his wife would salute you for bringing his sad plight to a weary world in this beautiful way.

And if you want to read my book: https://books2read.com/richardhauptmann