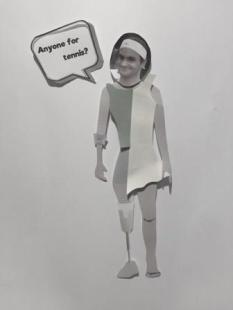 That’s Roger Federer, in case you don’t you know.

DRF opens in Mirek and Bree’s apartment, somewhere on the Gold Coast. In US, they would live in a gated community in Florida. In Europe, they would probably live in luxury in Monaco. The story goes something like this:

Mirek is an elite international tennis player married to Bree, an Olympic 100m silver medallist. They are madly in love, highly photogenic and wildly ambitious. The world is at their feet. Except for one thing…

All Mirek wants is Number One ranking. Alas, his nemesis Roger Federer ensures that he will forever be Number Two. Together, Mirek and Bree hit upon a unique solution.

Little does Mirek know that Bree will steal the limelight, win gold at the Tokyo Olympics and change the history of sport forever.

And Mirek will end in infamy, not glory.

An absurdist look at identity, love and ambition.