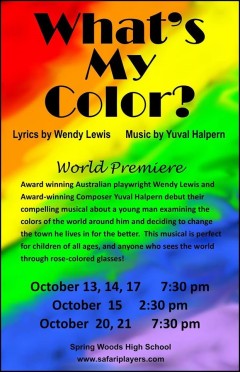 This is a fun-filled family musical for 25+ voices that premiered in the US in October 2016. Hellooo-ooo Spring Woods High! And a BIG ‘go, go, go!’ to the fabulous Safari Players! Check out some pics…

WMC is the story of HUE who lives in Tonetown where everything is grey.  A MYSTERIOUS MASKED STRANGER sends him off on a quest to find his colour and bring colour back to the town.

Musically, it’s a blast with songs ranging from swing to rap to bossa nova and everything in between:

The cast was terrific:

I want to say thanks to you all…all the choruses, singers & dancers, the dynamic duo of Ms Chrissie Cutler & Ms Terry Hibbert, the giggling pyramids, that Mysterious Masked Stranger (who was that masked man?), that crazy Book, Bubbles & co. (swish, swish…swish), the delightful Piglet, that sneaky Sphinx, those rockin’ red rocks, those mixed up hippies, that funky Prez, backstage guys, lighting guys, lead roles, you know who you are…you put on such an entertaining show!